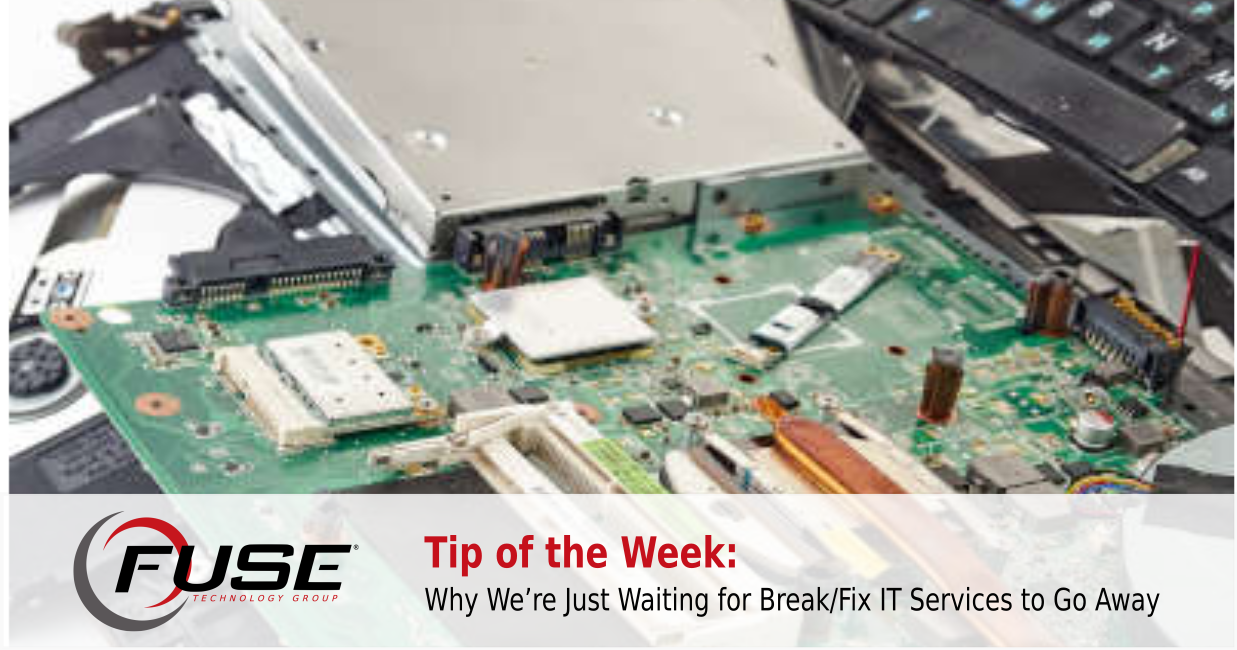 As much as we hate to admit it, the first thing that many people still think of when they hear the term “tech support” is the experience that comes with an antiquated approach to technology services: the break/fix method. Fortunately for us, we are seeing many businesses make the better decision, and turn to the clearly superior option, managed IT.

Therefore, as a managed service provider, we know that all we have to do is wait.

What is Two-Step Verification?

When business computing really took off in the 1970s, break/fix IT made sense. Businesses were able to deploy standalone microcomputers or distributed mid-range server systems that operated through remote terminals. Then, in the ‘80s, the personal computer combined the benefits of the two, and really highlighted the benefits that computers could offer a business. When Windows 3.1 was introduced to business users in the 1990s, the computer’s place in business was cemented in forever.

For all this time, computers would have their issues… but it just didn’t make sense to call in for repairs or put an internal IT team on it. If it could still operate somewhat, that was good enough. Should the computer break down completely, IT was brought in to fix it.

So, Were Break-Fix Services Once Okay?

Yes and no. Of course, this situation has always presented all the issues that have led many businesses away from the break/fix strategy today. For instance:

So, break-fix services were unpredictably expensive, and generally prevented any innovation or future planning for the client’s benefit, so issues had the tendency to repeatedly return. However, it wasn’t as though there was another option to compare it to at the time, either.

That option came around in the mid ‘90s, when the amount of technology in the office and its overall complexity increased greatly, with the introduction of fax machines, printers, and other hardware. Computers took much longer to repair when broken. The Internet exploded in popularity, adding an additional element of complexity.

A New Paradigm Emerges: Managed IT

This all meant that break/fix services soon became too inefficient to support businesses properly. Computers were no longer a convenience, but a legitimate necessity in the office, not to mention the other tools and devices that became key components to their processes. Downtime had evolved into something potentially devastating for operations, and expenses ran rampant.

As the new millennium came along, the modern managed service model was brought to the fore. This was thanks to an assortment of developments in information technology, including improved Internet, cloud technology, and automation. Using these tools, some IT providers saw a new opportunity and shifted how their services were delivered.

Gone were the days of waiting for operations to be in jeopardy before doing something about it.

Now, IT providers have the capability to remotely access and monitor a client’s network from afar, allowing them to more efficiently identify potential issues and mitigate them at effectively all hours—often, before a client ever encounters an issue. The biggest change, however, was how this approach was able to impact the way that managed service providers were able to charge for their services.

Rather than charging at an hourly rate, the nature of the service allowed it to be billed at a very inclusive monthly rate. This simplified matters for the client, as a set-rate service is far easier to budget for. As an added benefit, this also motivated those providers who made the switch from the flawed break/fix approach to deliver a better service to those who signed on to their services.

With managed services having been around and innovated upon for about two decades, there are even more opportunities for businesses to improve their processes and achieve greater goals. Break/fix is still around, too, but more and more businesses are seeing the comparative benefits of the managed service model and making the decision to switch. Managed services are a source of confidence. You no longer need to be concerned that your technology will bring issues into your business, because someone is there to take care of it for you.

Every so often, a new method is introduced that changes a foundational paradigm. Despite the relatively short time frame that business IT has been around for, managed services did just that… and therefore, break/fix services will eventually be—for all intents and purposes—phased out.

” If you want to keep up with all the methods that will improve your business’ operations, reach out to Fuse Technology Group at 248.545.0800 today!”